Why You Should Measure Your House

Square footage is the most important measurement you can get for your home. It serves multiple purposes and has many uses. Square footage can:

If your home has more square footage, you can sell it for a higher price. The same is true when you buy a home. You can determine if the listed price fits the square footage.

Adding an extra room or wall requires knowing how much space you have available to work with.

Why You Need Our Square Foot Measurement Services

If the local assessor has the incorrect square footage reported you can be overpaying on your property taxes. The assessor will only accept sketches performed by a professional in the field such as an Appraiser or an Architect.

We can provide you with a certified dwelling sketch for presentation to your Tax Assessor. Your tax assessor takes their calculations from the plans provided by the builder when the permits were submitted for in the building process.

The same can happen with public record. When this happens, you have an appraisal square footage discrepancy.

All builders do not calculate the square footage the same way. Few adhere to industry-accepted measuring standards.

Changes Made Aren’t Recorded Correctly
If changes are made in the building process, then the square footage could be different. Changes may be made to a home over the years.

Oftentimes, detailed plans aren’t drawn or submitted to the assessor. Your square footage could be wrong because of this.

In some cases even if plans are submitted through the building department, they do not make it to the assessing department for updating of the records.

They use other measurements that are based on tools other than a physical visit to the home.

Some of these include aerial photos such as Google Earth, other online data, or a viewing from the street. With these tools, many times it is impossible to determine living area from non-living areas such as sunrooms or covered patios.

In Maricopa County, the tax assessor measures the outside perimeter of the house for square footage calculations. This excludes areas such as the garage, carport, Arizona Rooms, screened porches or other similar areas.

Lack of Permits on Additions
A lack of permits on a project impacts square footage as well. Without a permit, there aren’t any tax records of the addition. This can lower the assessment value of the house even with the new addition.

The Effect on the Sale

Having the proper square footage of your dwelling can also aid in the sale of your home. In many cases, the Realtor uses public record data to market homes for sale.

This data is taken from the assessment records. If this is incorrect then the marketing of your home is incorrect. This can cause all kinds of surprises near the end of the selling process when the Appraiser measures your home.

When the Realtor markets your home, they use homes of similar size and amenities that have sold in the area. If the square footage is wrong, the data used to determine your listing price could be wrong.

This could mean the Appraiser has to use different data in the determination of the market value of your home. This data could be significantly different than the purchase price. Many times this stalls the selling process.

If you are looking for a marketing tool in the sale of your home we can also perform a floor plan drawing.

We include the interior living areas of your home in addition to exterior areas. These areas include pool representation, patio areas, outdoor kitchens, garages, pole barns and other improvements.

How a Lower Square Footage Works in Your Favor

When you’re buying a house, you want the most out of your home that you can get. Listed square footage can be smaller than actual square footage. As we’ve discussed, certain areas of the house aren’t listed on the property taxes. But they’re obviously there.

How to Fix Square Footage Discrepancy

If you discover that your actual square footage doesn’t match public record, you can request to have the data reviewed. Your local assessment department should look at the data.

Depending on where you live, you may have to submit a grievance or file an appeal.

Hire a professional appraiser to survey your home. They can do an official appraisal of your property. You can add this appraisal to your report to the department.

If the appraisal square footage discrepancy makes your property tax higher, you can appeal to make it lower. Specifically, Maricopa County gives you a few options for property tax appeal. 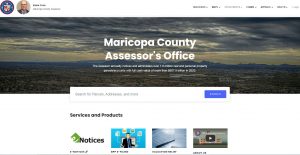 You can do this after you receive your yearly Notice of Value. But you must file your appeal within 60 days of receiving the notice.

Go to the County Assessor’s webpage. From there, you can find the Residential Petition for Review of Valuation (DOR 82130R). The form can be printed out and mailed. You can also fill out an online form.

Regardless, you need to know several things in order to fill out the form.

The Assessor’s Parcel Number (APN) gives a property a unique number. This number identifies the property to the Assessor. Using the number, they can find old tax information.

Finding your parcel number has become easier with the help of technology. Simply go to the Maricopa County Assessor’s webpage. Enter your street address in the first search bar. You’ll be given your parcel number as well as other valuable information.

2. Which Valuation Approach You Used

The Assessor needs to know which valuation approach you used to determine if your home was valued too high. There are four main methods:

Judicial Appeal becomes an option if you miss the deadline for Administrative Appeal. The appeal must be filed with the Arizona Superior Court.
You are required to hire an attorney for this process. When filing you must choose to file under a Tax Court Case or Small Claims Case.

Accurate Appraisals U.S.A. offers property tax appeal services as part of our residential services. See which of our appraisal services fits your needs.